I’ve been single for a while. I’m not sure how long it is, because to put a timeframe on it would mean defining not-single.

Is it a couple of dates with the same girl/guy? If so we could say it’s been about 9 months for me, though there wasn’t a break-up as much as a stop-talking. Is it when you change your facebook status, because there was a period of two months where I was officially in a relationship with my right hand (which stopped when people I didn’t know started friending my right hand). Is it when you reach a certain milestone in monogamy, because we’re probably looking at around 2008 there, and if you count anything more concrete than getting together once or twice a week for the odd drink, meal, and sex, well, I’ve never done it.

For years I defined myself as a failure on account of my singledom. Fiction across the media is full of stories of two people getting together, defeating the odds. I spent years changing the subject whenever my parents mentioned my getting married and spawning offspring (thankfully one younger brother being married with three kids and the baby of the family being engaged has taken the heat off me).

I dunno, when it comes to relationships, I have no idea what I’m doing. Or, in more eloquent words: 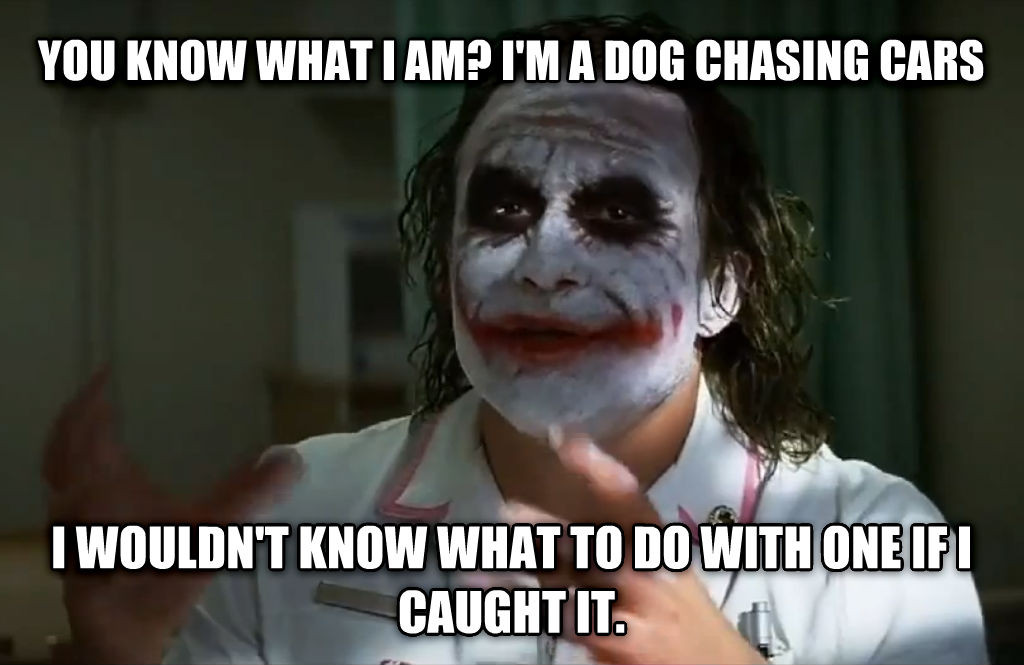 Even today I have Tinder on my phone, and often a tab or two open on various dating sites. I don’t often recieve any messages from anyone, and I’m not going to send the first message, but I’m there, lurking in the corner, as a throwback to the desperation of yesteryear. The fact that Tinder in my city appears to be full of thousands of women all born in 1990, all with three pictures, interesting names, and who ask if their webcam is hot when they match, just makes me avoid the current champion in meeting people.

It’s not just relationship stuff. I think for years I defined myself according to the people I spent time with.

When I was 14 I would have classified AC/DC to be my favourite band, and guess what, my best friend at the time considered the same. My later teens involved listening to fairly generic heavy metal, Metallica, Tool, System of a Down and the like, and smoking a whole bunch of weed, mostly because that’s what my friends did. I went from that to growing my hair long, dying it black, wearing skirts and makeup, and getting way too into the Cure, to fit in with my first set of flatmates, and after that I spent time with a decemberunderground-era Davey Havoc emo fringe, hanging out with the post-hardcore kids that I worked with.

I don’t know if it’s the fact that I read a lot of Chuck Palahniuk in university, but I think I really took to heart the line from Invisible Monsters: ‘Nothing of me is original. I am the combined effort of everyone I’ve ever met”.

A couple years ago I guess I decided to change that. Now I would say that I have friends that I spend time with because we already had similar interests. I listen to my own music, I watch the TV and movies I want to, and have a style that makes me feel generally comfortable in my own skin.

And going back to relationships, well, I’m comfortable there too. Yeah, I probably have a massive pile of self esteem issues to work through, but I’m happy with myself, and don’t see myself as needing to be one side of an ampersand (to paraphrase Amanda Palmer).

Except for those few occasions where I’ve propped up the bar at Wonder Horse too long and drank half their stock, but that’s getting more rare as time goes by.

I’m embarrassed to be that man I was years ago, assuming women were put on the earth to be a girlfriend or wife, thinking the friendzone existed, hitting on women in bars and apologising to their boyfriends. I’m more comfortable with assuming that everyone in my life is a platonic friend until proven otherwise, and letting everything grow organically.

I really do miss making out though.