I’ve been single a while. Alright, it’s been a real fuckin’ long time. And really, I’m comfortable with it, besides two things: A) My right arm is approaching Popeye proportions from overuse, and B) it is quite difficult to find decent, economical, tasty recipes and foodstuffs for one. Most of the time if you go to a supermarket you’ve got to buy enough food for a couple, a family, or a platoon, and if you’re a single guy (or gal) you have to buy perishables creatively to maximize the amount of meals you’ll get out of them before they expire. Or you get sick of eating the same fucking thing over and over again (on that note, I got three meals out of the meatballs I made last time).

I’m pretty sure that there’s a shitload of single people in Italy, because they come up with some of the most awesome single serving dishes ever. It’s pretty easy to whip up a carbonara for one, but if you’re too lazy for that, then spaghetti aglio, olio, e peperoncino is what you want. You can look really fucking fancy with your long foreign name for what is essentially single guy pasta fry up.

It’s really simple. You can see all the ingredients in this picture:

The ingredients being: Spaghetti (Might as well use dried because it’s easy to keep in the pantry, but you could use fresh if you’re so inclined), a metric shit-tonne of garlic (or if you’re not a garlic fan you could decrease it to an imperial fuck-ounce, it’s up to you), some chili, either dried flakes, the crushed stuff I use here, or fresh chilies, depending on how fancy you are, and the best extra-virgin olive oil you can afford. As you can see here, I can’t afford the really good stuff, but it’s still passable. Also check the wine glass in back. That’s half a bottle of a decent Pinot Noir there… better recognize!

First off, cook your pasta. Use as much or as little as you’re going to eat. I’m assuming here that you know how to boil water and dunk pasta in. If you don’t, then ask an adult who’s not a fucking moron to do it for you. Make sure you salt the water though. I’ve had a lot of shitty pasta before, and every time I can pin the issue down to under salted water. Apparently you’re meant to cook pasta in water as salty as the Mediterranean, which essentially translates into putting a fuckload of salt in. When you’ve finished salting it, go ahead and put some more in. You want motherfuckers to be able to walk on that water.

While the pasta’s cooking chop your garlic up as fine as you like it. You can get away with not so fine, but only if you are a big fan of garlic. Also chop up your peppers if you’re using fresh. You don’t want to use too much chili though. A pinch of dried, a third of a teaspoon of crushed, or half a fresh pepper (no seeds) should be more than enough. You don’t want to make it as hot as hell. All you’re trying to do is add a little bit of bite and bring out the flavours of the garlic and pasta.

You can also add a little onion if you’re so inclined. I do it on occasion. It tastes good.

When your pasta is about halfway done then put some of your extra virgin olive oil in the pan. You’re not looking for a light coating as if you’re frying something, this is where all the flavour of your pasta’s coming from, so use a decent amount. Stop worrying about your weight, you look ok. It’s your personality that stops you getting laid anyway.

Heat up the oil, but not too much. A low heat is enough. Olive oil isn’t exactly the most forgiving of high heat, and extra virgin less so. When your pan is up to temperature throw your garlic, chili, and anything else in the pan, and saute the hell out of it. Keep it moving. Use a wooden spoon, or if you’re fucking awesome like me, pick the fucking pan up and shake it around. You only need a few minutes to get all the garlic and pepper flavours into the oil. 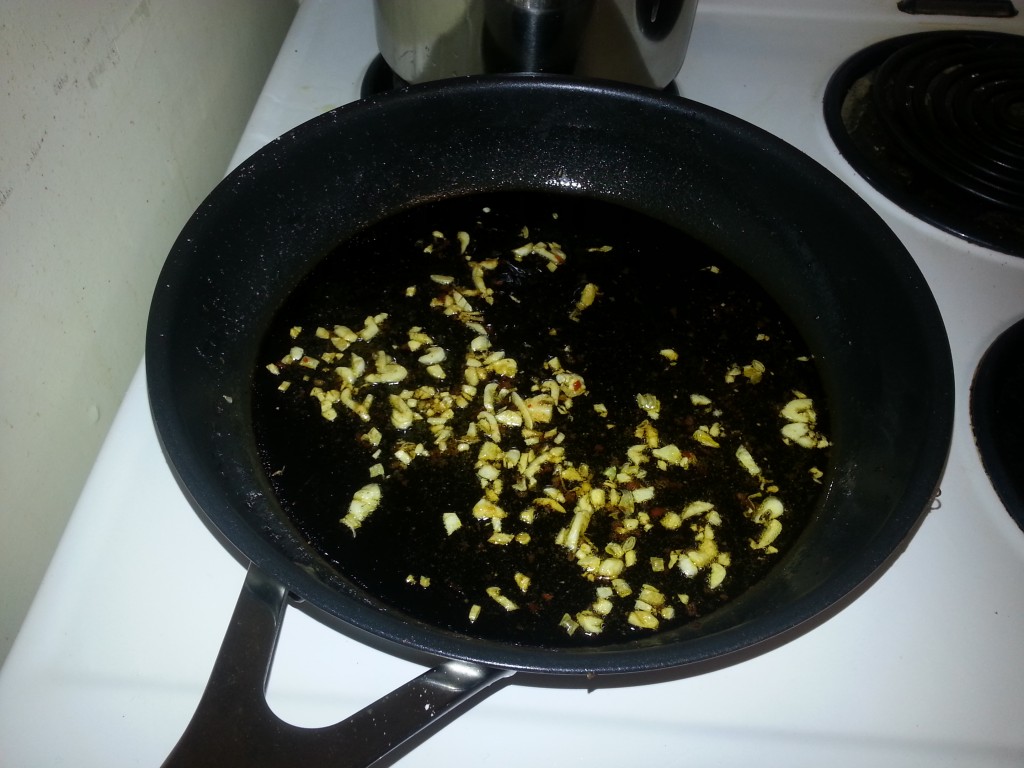 By now your pasta should be al dente. Take a strand out and throw it at a wall. If it sticks, you’re done (otherwise you can taste it, but I believe in throwing shit at a wall). Drain that shit in a colander, then dump the whole lot in the pan, and toss it around like it’s a redheaded baby to coat it in the oil and other goodness. Season it, and toss it around a little more. And by season, I don’t mean a sprinkling of shitty table salt and pre-ground black pepper. I’m talking freshly ground rock or sea-salt and black peppercorns. If you can’t handle that shit, get the fuck out of my sight. 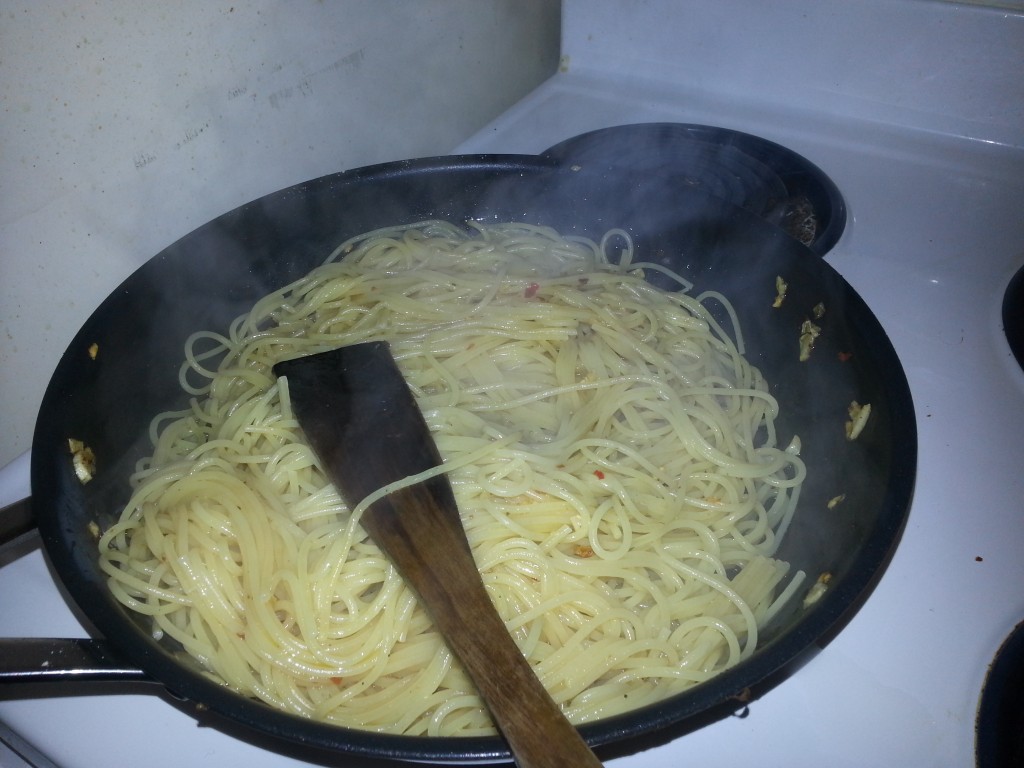 Then chuck it on a plate. If you want you can sprinkle a little parmesan cheese on it, but I usually don’t. Eat the fuck out of it, and wash it down with a good wine or craft beer. Fuck yes.

On a less food related note, I’m trying to come up with a name for the food section of this blog. I need something fucking awesome, but it’s not coming to me. Leave some ideas in the comments and I might fuck you if you wanted it.